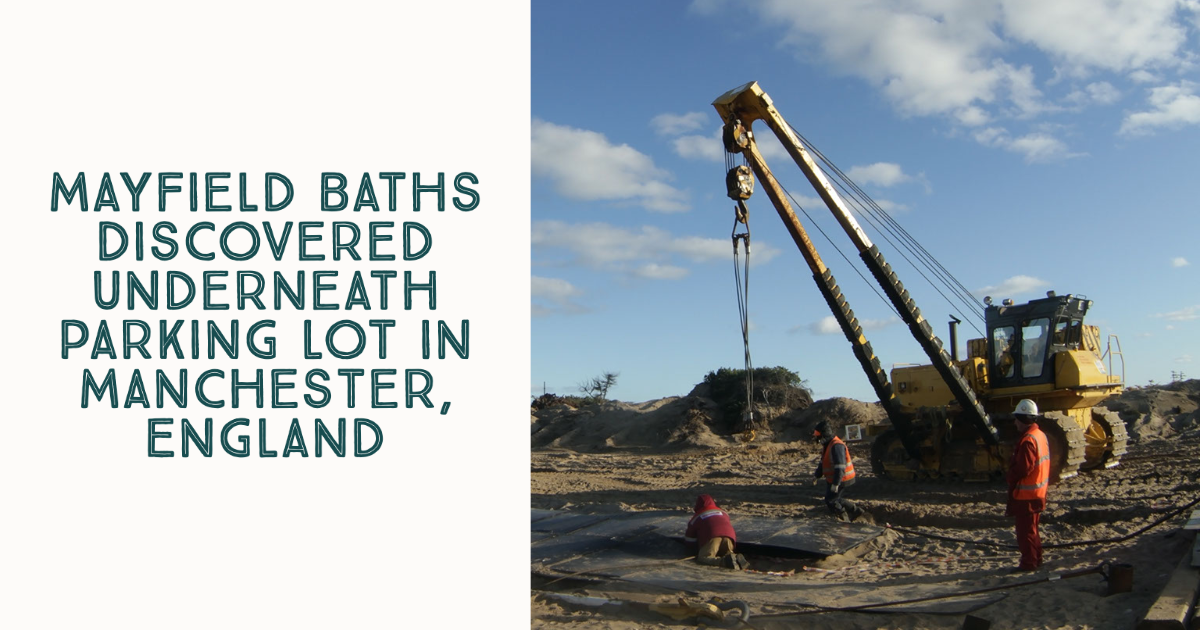 Builders uncovered a remarkable find when digging up a parking lot in Manchester, England. While expecting to unearth nothing but dirt, the team discovered a bathhouse dating back to the Victorian era, making it over 150 years old. Although the project was initially meant to create Manchester’s first public park in a century, the bathhouse itself presents an exciting opportunity for researchers to learn more about 19th century UK and more specifically Manchester’s history. Additionally, these bathhouses in many ways are fairly unique and speak to English history for the average person in a way that was previously more difficult to comprehend. 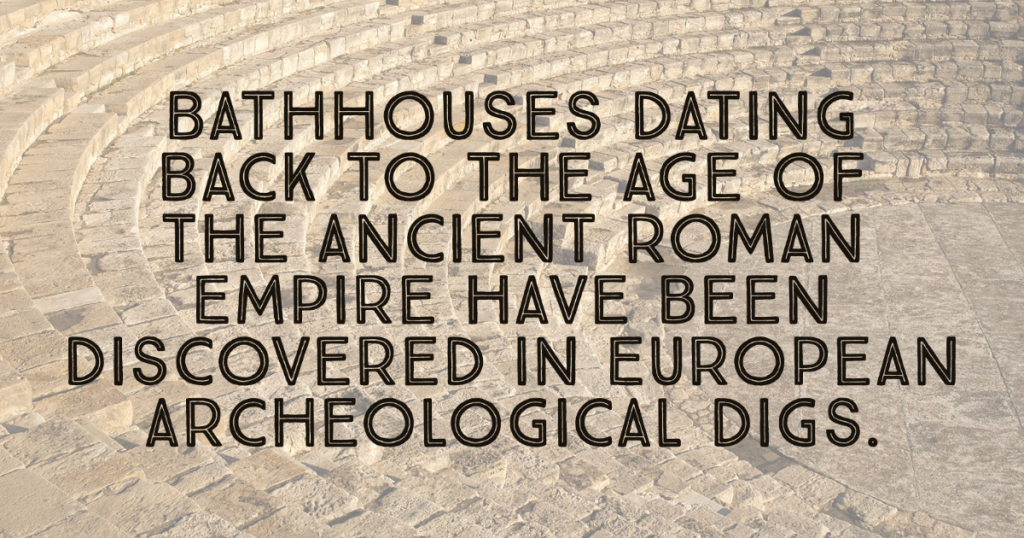 Technically speaking, what was discovered underneath the parking lot differs from what people may think of when they hear about ancient bathhouses. In the past, bathhouses dating back to the age of the Ancient Roman Empire have been discovered in European archeological digs. However, these actually differ significantly from the bathhouses found in Manchester. In fact, Manchester city archeologists have determined that the bathhouses revealed in the parking lot were Mayfield Baths. These baths were meant for textile mill workers of Manchester in the 19th century UK. They could both bathe themselves and wash clothes in the Mayfield Baths, despite the fact that the bathhouses obviously lacked modern plumbing facilities. They were actually the third public baths in Manchester, and actually marked a major change in circumstances for textile workers in the city.

Remarkably well-preserved, especially considering the fact that they have been underground for years, the Mayfield Baths are relics from another time and offer valuable research opportunities for historians and archeologists. In particularly good condition were the tiles lining the baths. These tiles could be compared to modern pool tiles in many ways, forming the sides and bottom of the baths. The fact that the tiles have withstood the tests of time speaks to their quality and strength. As the excavation continues, researchers will continue to learn more not only about how the Mayfield Baths were constructed, but the purposes that they served and the people that benefited from those services.

What Was Uncovered in the Parking Lot 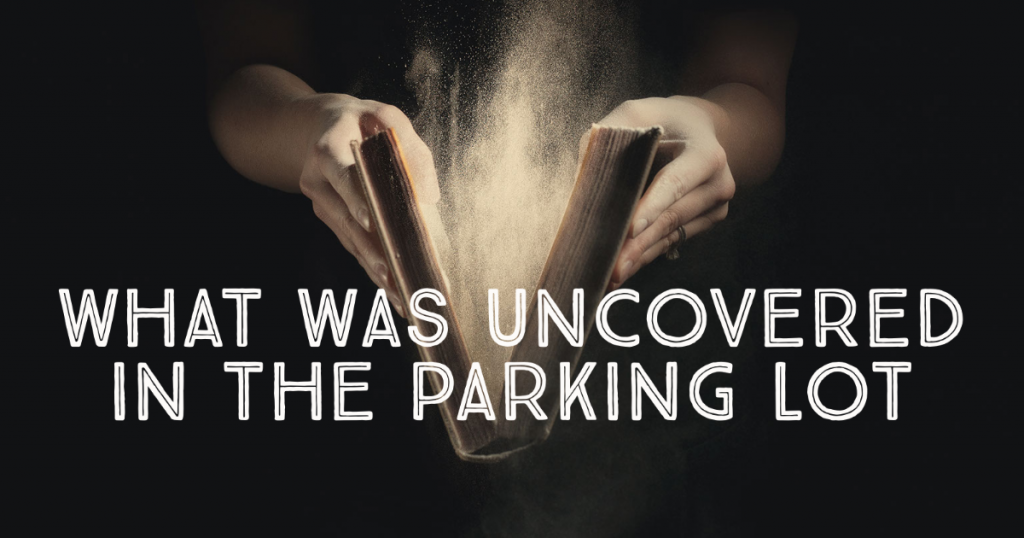 The space that was uncovered reveals quite expansive bathhouses; thus far, two have been discovered in total. Each bathhouse is essentially a pool, stretching 62 feet in length. Along with the pools, there were boilers discovered, though they do differ quite a bit from the machines used for boiler services today. The boilers were alongside flues and pumps, both of which were similarly discovered at the Mayfield Baths. The boilers themselves would heat the water and send it circulating throughout the pools, ultimately distributing heated water for the baths and the laundry. Digital drawings were made of the excavation site, and 3D modeling and laser scanning and drone photography were both used to support and create those drawings. These allow researchers to make more careful choices regarding their excavation efforts, to ensure that they do as little damages to the Mayfield Baths and the surrounding areas as possible.

As previously mentioned, the Mayfield Baths date back to 19th century UK, and would have initially been established in 1857. They were meant to essentially revolutionize residential plumbing services for the textile workers in the area. These textile workers essentially made up the backbone of 19th century Manchester. The city had been converted by the trading industry into the manufacturing capital of England. In fact, Manchester itself was referred to by many as Cottonopolis, due to the fact that cotton mills were so prevalent in the area. But despite the fact that the textile mills and cotton, in general, brought a great deal of money into the area, it wasn’t without certain complications. Sanitary conditions were quite poor, which was why the Mayfield Baths were established in the first place.

These inground pools were established in Manchester in order to improve working conditions and health and safety for textile mill employees. These mill employees were suffering greatly from their working conditions, and therefore required the interventions offered by the city government itself. In many ways, the Mayfield Baths were quite advanced for the 19th century UK, and could be referred to as early public works for the people. Not only did textile workers typically live in unsanitary conditions; they also lived in incredibly cramped conditions and were forced to wash their clothes in used bathwater. This meant that they kept circulating through the same contaminated bathwater, growing sick and finding it difficult to stay clean. But prior to the working class people gaining access to the Mayfield Baths, something similar was already in existence for the upper classes.

The city of Manchester understood how to install the Mayfield Baths, and furthermore understood that they would be effective in terms of providing early wastewater treatment and services because the middle classes of the 18th century had already been enjoying similar facilities in other areas. As it became apparent in 19th century UK that the lower classes and the working poor were in need of similar facilities, similar design plans were followed in order to install the Mayfield Baths. Additionally, the pools were actually available to be used by both men and women, though the two sexes were confined to separate baths. This not only highlights the importance of the pools themselves but the fact that both men and women functioned as textile mill workers. Due to the early issues surrounding child labor laws, or lack thereof, people of a wide variety of ages worked in the textile mills, and therefore frequented the Mayfield Baths.

People were not only able to clean their clothes and bodies in the Mayfield Baths but take steps to ensure their overall health. The cleaner they were, the less likely it would be that they would experience infections in open wounds. People in the 19th century UK were often exposed to bacterial infections simply because they were unable to regularly clean themselves. Additionally, the Mayfield Baths offered individuals the ability to engage in regular teeth cleaning. Although many people do not take their dental care very seriously in the 21st century, the fact is that infections linked to decaying and abscessed teeth could be potentially deadly to people living in the 19th century. Therefore, people were actually able to maintain their health and extend their lifespans, potentially, simply by using the Mayfield Baths.

Employees in 19th century UK textile mills were, as previously mentioned, in constant danger of having their health compromised. The Manchester economy was highly dependent on these people being able to work consistently and efficiently. But unfortunately, the conditions of textile mills, as well as the living conditions that mill employees were forced to deal with, made it difficult for them to thrive. In fact, the labor conditions presented for textile mill employees were actually linked to the creation of early laws protecting laborers.

Workers usually worked quite long hours, often working six to seven days a week with little sleep. The work within a mill itself was quite hard, and the machines were not without their inherent hazards. It was incredibly easy for employees to get their limbs caught in machines, for example, after which they might require amputations or subsequently die from infections. Working conditions, like living conditions, were often packed and unsanitary. While working, employees were often breathing in what was known as bad air. This air could be filled with coal dust, as well as fibers from the textiles. This could cause permanent lung damage as well as chronic respiratory diseases. Chest diseases, coughs, blood spitting, and general pain could lead individuals to experience insomnia as well, which would naturally lead to them feeling exhausted and being more endangered at work.

There were also chemicals involved in working within a textile mill. These chemicals would cause internal damage if they were unintentionally ingested, which was easy for individuals to do. Furthermore, chemicals could affect the skin and cause serious damage over time. Another issue that came from these chemicals is that they could fairly easily filter into the water system. Therefore, it was incredibly important that steps were taken to provide water that was as clean as possible for textile mill employees, at least by the standards of 19th century Uk.

The Mayfield Baths were able to provide a great deal of sanitation in part because the pumps and flumes circulated water in and out of the baths. Therefore, the water in the baths was not stagnant, with dirty water being replaced with clean water on a regular basis. While this may not seem to make a big difference compared to sanitation practices undertaken today, it was hugely impactful. Even in this modern era, it’s not uncommon for issues like Legionnaire’s disease to affect people as they breathe in contaminated water droplets — of course, today, this can be remedied through water treatment. The Mayfield Baths represent a moment in time in which the city of Manchester began to focus more on the public safety of workers and people in general. 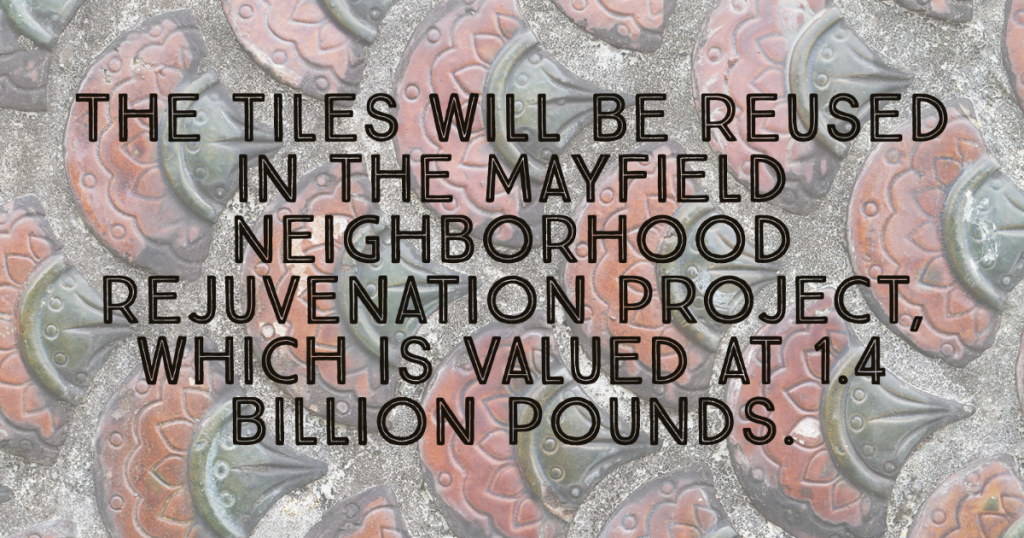 Therefore, it is perhaps significant that the tiles discovered in these 19th century UK bathhouses will be reused for the benefit of the public as well. The tiles will be reused in the Mayfield neighborhood rejuvenation project, which is valued at 1.4 billion pounds. Although some may decry the fact that the tile is being reused, this is not only a budget-conscious move but is perhaps consistent with the original intent behind the creation of the Mayfield Baths. While there will still need to be a great deal of money spent on the Mayfield neighborhood rejuvenation project, considering the costs of new paving, housing development projects, and more, the reuse of products like those tiles can make the overall project somewhat more cost-efficient.

Additionally, there will be new spaces created through this neighborhood rejuvenation project that have value for the community that is currently in existence. A new park will be created, as previously mentioned, as well. There is additionally a landmark former station on Fairfield Street near which the rejuvenated projects will be located. This will allow everyone involved to enjoy spaces that are within the historic areas of Manchester, while at the same time being able to live more conveniently and in a rejuvenated, more aesthetically pleasing area. This is the reason why the parking lot was originally constructed, and the project can’t necessarily be completely diverted because the Mayfield Baths were discovered. Much can, however, be found through the study of the baths themselves.

Perhaps owing to the U.K.’s lengthy history, this is not the first time that a remarkable discovery has been made during projects centering on parking lots. In 2012, the skeletal remains of King Richard III, the last Plantagenet king of England, were unearthed beneath a parking lot. Not only did these skeletal remains prove that the king did indeed die in battle; they also confirmed that he did indeed have scoliosis, as was long debated by scholars. These types of discoveries allow historical researchers to have a better perspective on what actually happened in the past. Furthermore, this is a way for history to become more tangible to the average people living today. For years, people walked over the former grave of Richard III and the Mayfield Baths without realizing it. When these discoveries are uncovered, it becomes more clear that on a daily basis, individuals are interacting with history whether or not they know it. Additionally, while some items can be repurposed, like the tiles found in the Mayfield Baths, others may be donated and sold to museums, allowing them to be preserved for future viewers.

The discovery of the Mayfield Baths allows the people of Manchester to gain insight into what life was like for residents of the past, as well as their effects on the local economy and how hard they worked. It also allows them to fully understand exactly how far labor conditions have progressed. Discoveries like these allow sympathetic windows into what life was like in 19th century UK.